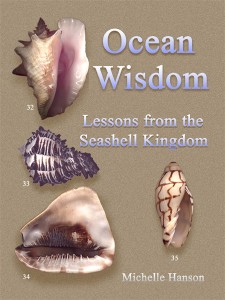 In our last post, I discussed the Commercial Trochus, how it’s on the endangered species list. It has been used for many years in the production of mother of pearl buttons or in a variety of other crafts. I have a special connection with the Commercial Trochus, because decades ago, I obtained two of these, but both were altered by human crafters. The first is carved into spirals and the second has the outer shell layer removed to reveal the inner mother-of-pearl lining. In a shell reading, the likes of which I do at Ocean Oracle, this shell indicates that the client is experiencing someone making decisions without consulting him or her, just assuming he or she will go along with whatever has been decided.

But the Commercial Trochus isn’t the only seashell on the endangered species list; there are other shells on the list that carry a huge fine for anyone selling them in stores. I was very fortunate to obtain one of these shells from New Guinea before it reached endangered status. I have another shell that is impossible to get now. It is the national shell of Mauritius and, as such, they asked tourists not to collect them. That request fell on deaf ears, however, and it is now against the law to collect this shell. The only way to get one is to have the good fortune to find an estate collection from a previous collector.

The meaning represented by the national shell of Mauritius is a behavior that will change voluntarily or by force. That is why I gain so much pleasure from sharing the shells in the deck of Ocean Oracle. It is almost as if the shells knew to come to me before these changes in their status, so I would be able to include them in Ocean Oracle. Through the cards in the deck, people can interact with these shells without causing any harm to the mollusks.