Some Seashells Are Endangered Too, Part 1 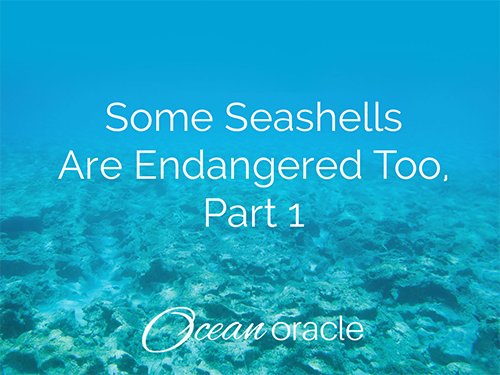 Every day it seems like there is a new animal on the endangered animal list or, even worse, made extinct by the cruel actions of man. We see this repeatedly. We can mention what happened to Cecil the lion over in Africa at the hands of an American dentist. We can also mention the whales that are beaching themselves all over the planet, on every shore in every hemisphere. It is a disheartening world at times concerning our friends in the animal kingdom. However, our seashell friends are also at risk of this “endangerment,” as discussed in GMA News Online.

They report, “Several sacks of endangered seashells aboard a fishing vessel were intercepted and seized off Cebu province last July 8, the Coast Guard said. The Philippine Coast Guard said the fishing vessel was intercepted off Olango Island in Lapu-Lapu City. It said Coast Guard personnel were part of a joint operation with the Navy, Bureau of Fisheries and Aquatic Resources and the Bureau of Customs. Operatives had acted on intelligence information indicating a blue fishing boat was allegedly loaded with imported cooking oil from Malaysia. Team members boarded and inspected the vessel and failed to find the cooking oil but saw 138 sacks of shells in the vessel’s storage area.”

This sounds like it has all the makings for a Hollywood blockbuster. The fishing boat attempted to skirt the system by saying it was carrying imported cooking oil, but the Philippine Coast Guard was wise to check the cargo. Imagine their surprise when they discovered no cooking oil…on a cooking oil ship! Thankfully, they saw through the charade and were able to confiscate the sacks of endangered seashells.

The story is a reminder that some seashells are endangered too; they deserve our love and care too!