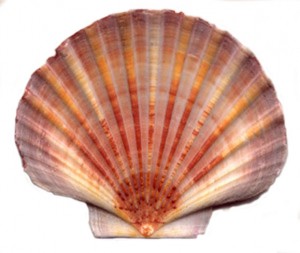 Happy New Year – 2016 is here and that means we all have an excellent opportunity to change the trajectory of our lives, a chance to get off the paths we were all on in 2015. If you were feeling unaccomplished, that your soul was not having any opportunity to soar, then this is your time to shine.

While New Year’s resolutions seem as cliché as whatever a motivational speaker might spout off at you in the freemason hall of some hotel, there is an absolute validity to their importance. Resolutions provide us with structure – now whether that structure falls apart or not, it is still a structure giving us some steady ground as we push forward into our new lives. In a way, resolutions are like seashells – not only do they provide us with a solid foundation, they also point us in the right direction, which I have explored in the last few blog posts leading up to the New Year.

Seashells give us a glimpse into the possibilities of the good life or at the very least the right kind of life. After all, “Working with seashell partners can facilitate positive change in your life. As the shells reveal hidden thoughts and beliefs that may no longer serve you, this empowering awareness can reshape your future.” Seashells also remind us that the final curtain will fall on the bigger picture. This might be why Southern seashell graves, mounds with seashells cemented on them to create protective grave covers, were so popular a century ago in Texas, Alabama, Georgia, Mississippi, Louisiana, and Florida.

According to Kelly Kazek of Al.com, “The types of shells used for this construction are the type commonly referred to as “cockleshells,” the shell of a salt-water bivalve such as a clam.” But why use seashells at all? Kazek asks, “So if not because the graves were close to the shore where shells were plentiful, why did people use seashells on graves?”

Needless to say, it’s an interesting mystery about a very peculiar tradition. Thankfully, there are several theories, lots of speculation, about these seashell graves, but no one knows the exact reasons behind it. Some say that it is a tradition that originates out of Africa, that the seashells are a representation of slaves returning home to Africa. Others say that it is a Christian thing that “clam shells, scallop shells and other types of shells are a symbol of a person’s Christian pilgrimage or journey through life and of baptism in the church.” 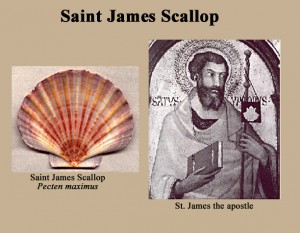 The picture of St James is from Kingdom of the Seashell originally copyrighted 1972 by R. Tucker Abbott.

In particular, the St. James scallop is found on the shores near Compestella, Spain. Sacred pilgrimages are made here to the shrine of St James the apostle. As the pilgrims were cleansed of their sins, they picked up St. James scallops from the shore and placed them in their hat brims to symbolize their new status. 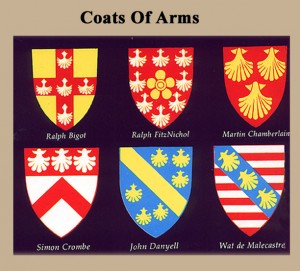 The coats of arms is from SHELLS Treasures from the Sea copyrighted 1979 by James A. Cox.

Later in British heraldry, family coats of arms included stylized scallops associated with their heroic ancestor who fought in the holy wars, or made the pilgrimage to Compestella. In this way, the scallop combines the qualities of a sacred journey and being someone’s hero to yield a hero’s journey. It is also the symbol of Shell gasoline stations.

Despite the spiritual significance behind the tradition, others think that the tradition is influenced by economic factors. “William Flake “Sonny” Joiner, an Alabama genealogist, wrote that he believes the shells were used by poor Southerners as a means of protecting grave sites.” Southerners had to make do with what they had on hand. Writing for the blog SouthernGraves.net, Stephanie Linecum writes, “What is missing most often from a pioneer southern folk cemetery is commercially produced gravestones or granite or marble…A common decorating practice in southern folk cemeteries still seen today is the use of shells.”

With so many theories surrounding this interesting tradition, you will surely not be bored digging into it, but one thing remains clear: Seashells played a prominent role in representing the transition from this life to the next.